skip to main | skip to sidebar

Have you considered the low cost and high flexibility of unmanned aerial vehicles (UAS)?

Hello!
I had lunch with Bryan Bailey recently, owner of the Anchor Reliance Group (ARG). If you need a payload package of less than 50lbs to fly, ARG can help you make that happen. From leasing a UAV, to obtaining airspace authorization and clearances as well as risk assessment, ARG can do it. ARG is a new consulting and program management firm specializing in projects that utilize UAS for technology development and practical flight applications. 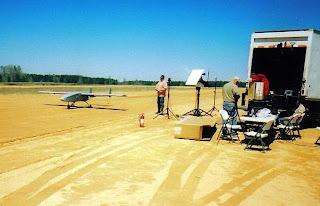 ARG’s business model is built on the premise that every technology-based organization, whether military, civil, or commercial, can find a niche within the unmanned systems sector. By reaching beyond convention, ARG enables organizations to realize their objectives through the application of UAS.

Based in Somerset County near the Maryland-Virginia border, between the Chesapeake Bay and Atlantic Ocean with access to both air and maritime environments, ARG is convenient to Washington DC, and the Hampton Roads and Greenbelt technology regions. Nearby flight and test ranges such as Wallops Flight Facility, Fort Eustis, and Fort Pickett, and local military facilities all offer a diverse choice of terrains and resources for a variety of flight projects.

To find out more about the services and capabilities at Anchor Reliance Group, visit ARGs web site at http://www.anchorreliancegroup.com or call (443) 783-6763.

Why not give him a call today?

As you would expect, soldiers in the military can receive training on how to fly and operate Unmanned Aircraft Systems (UAS).

Did you know that UAS training is now available on at least one US college campus?

I just read an article about Kansas State at Salina where an online certificate program class is offered for students. The program could be a degree program in the next few years according to Eric Shappee, an associate professor of aviation at K-State-Salina.

One of the more remarkable aspects at K-State-Salina is the Federal Aviation Administration (FAA) has issued something called a certificate of authorization (COA) for the Aerosonde (a small unmanned aerial vehicle built by AII Corporation) to fly over Crisis City, an emergency response training area near Salina.

A COA is an authorization issued by the FAA to a public operator for a specific UAS activity. After a complete application is submitted, FAA conducts a comprehensive operational and technical review. If necessary, provisions or limitations may be imposed as part of the approval to ensure the UA can operate safely with other airspace users.

Crisis City is an emergency response training area that is part of Great Plains Joint Regional Training Center adjacent to the Air National Guard's Smoky Hill Weapons Range near Salina. The FAA's issuance of the COA gives the Aerosonde the ability to fly over Crisis City and allows extensive training in search-and-rescue operations through use of sites that include a mock disaster-struck city, crashed transportation vehicles and a collapsed building.

Here is the article:
Unmanned aircraft program among first of its kind
http://www.kstatecollegian.com/unmanned-aircraft-program-among-first-of-its-kind-1.1776161

http://www.aticourses.com/unmanned_aircraft_systems.html
Posted by UAS Instructor at 6:48 PM No comments:

I was reading a article about UAS today.

and I noted a quote from Mike Kulinski from Enerdyne.

I met Mike about a year ago when he was in Washington, DC. I had lunch with Mike and also Steve Gardner, also of Enerdyne. We ate at the Lincoln Waffle House; great food and low prices.

Anyway, Enterdyne Technologies has a twenty year history of technical innovation in high-reliability video compression digital products which are widely used in UAS.


One of their products can easily covert your old analog link to a new digital link with improved performance and link budget which results in increased range for your UAV.

For even more information, please see:

Posted by UAS Instructor at 9:36 AM 2 comments:

UAS, Comm Daily and Me!

I am really excited this week. Why, do you ask? Well, I would love to tell you.

I was quoted this past week in an article in Wednesday’s Communications Daily (Vol. 29, No. 183). Communications Daily calls itself the nation's preeminent telecommunication industry news source which provides its readers with immediate, accurate and insightful coverage. It is the only publication the FCC buys for each and every of its employees.

I was interviewed by Scott Billquist, their Geneva, Switzerland correspondent. He found me from a press release he found online about an international Unmanned Aircraft Systems (UAS) group that I chair.

The interview was conducted via telephone and several rounds of email. Scott keep his promise of letting me see the quotes he attributed to me before posting his article so I could review and make any corrections.

As the article explains, the fixed-satellite service operators are concerned that possible allocation action taken at the next World Radiocommunication Conference (WRC) in 2012 to accommodate UAS may affect their business. So stay tuned.

The WRC, which produces a formal treaty regarding spectrum use, meets for four weeks and is attended by nearly two thousand delegates from almost two hundred countries. The conference will take place in Geneva, Switzerland. I have been involved with WRC-95, WRC-97, WRC-2000, WRC-2003, WRC-07 and I am heavily involved in US preparations for WRC-2012.


The entire article can be seen here:
http://www.aticourses.com/MarkLewellen_UAS_CommunicationsDaily_Article.pdf

http://www.aticourses.com/unmanned_aircraft_systems.html
Posted by UAS Instructor at 6:42 PM No comments:

Let’s talk a bit about the terminology of unmanned aircraft systems (UAS).

The history of UAS really starts back before World War I. Maybe one day a future post will go that far back into the past. The modern era of unmanned aircraft systems (UAS) began in the 1960’s.

I first became involved with them back in the 1980’s when I conducted a frequency band study for the Pioneer program. I remember it was a competition between IAI Corporation and McDonnell Douglas. Pioneer was procured starting in 1985 as an interim capability to provide imagery for tactical commanders on land and at sea. It has now supported every major U.S. contingency operation to date. 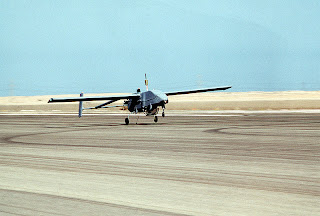 Pioneer touching down on the runway

Back then the phrase was Remote Piloted Vehicle (RPV) when the pilot was “in the loop” and had near-real time control of aircraft and flight surfaces via a two way-radio link (including the return telemetry). Most pilot in-the-loop take-off and landing UAS use dual data-links and have low system delays (latencies) since the pilot is actively maneuvering the aircraft in (near) real time.

In the1990’s it became Unmanned Aerial Vehicle (UAV) at the urging of the FAA who wanted to include the pilot and emphasize the system aspect of UAS.

This is called pilot “on the loop” and the beginning of automation. Most flight profiles are pre-programmed before take-off. They can be modified in-flight if needed. The pilot can also take over in emergencies.

Pilot on-the-loop systems often only have single-thread LOS data-links and higher delays (latencies) can be tolerated because the pilot is not in real time control of the take-off or landing maneuvers.

Please see the links below for more information:

Welcome to my page about Unmanned Aircraft Systems (UAS).

I have been working on UAS issues for over two years now. I have a quarter of a century experience in radio spectrum and regulatory issues (man that makes me feel old).

There are many issues related to UAS and spectrum access. I hope to address some of them and other aspects of the exciting world of UAS in the future. See you next week.


Please see the links below for more information: